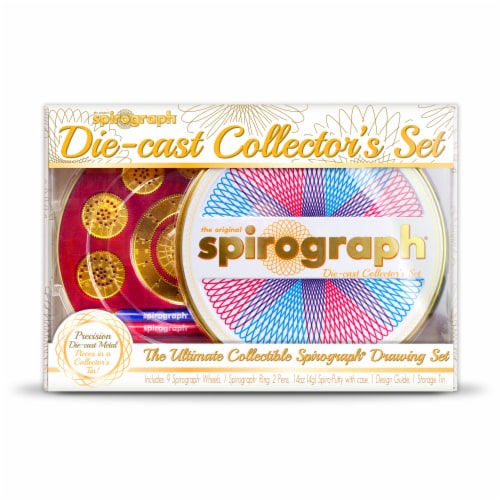 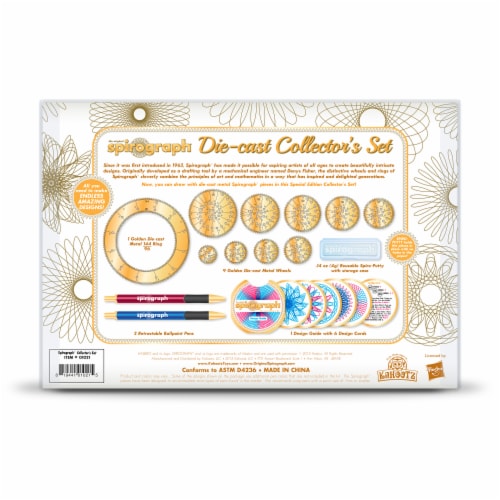 The ultimate Spirograph collector's set is here! This 50th anniversary edition features the iconic Spirograph drawing wheels, upgraded for the first time ever in die-cast metal! With the 9 golden die-cast wheels and 1 golden die-cast ring, you can create countless amazing designs with machine-like precision. The pieces work just like classic Spirograph sets, but with the weight and feel of a nostalgic die-cast toy. The die-cast Spirograph wheels work with the 2 retractable ballpoint pens included in the set as well as with most standard pens, markers and pencils. The full-color design guide explains the fundamentals of drawing with Spirograph as well as giving step-by-step instructions for creating your own designs. This golden anniversary edition comes in a collectible Spirograph display tin, making it the perfect executive set or toy collector's must-have item. The included Spiro-Putty holds the Spirograph pieces securely on the paper so that you can create intricately beautiful designs with no holes in the paper. The die-cast pieces also feature the classic Spirograph pinholes so that you may add your own map pins just like the original 1965 Spirograph. (Adult supervision required when using pins. Pins and pin board not included.)