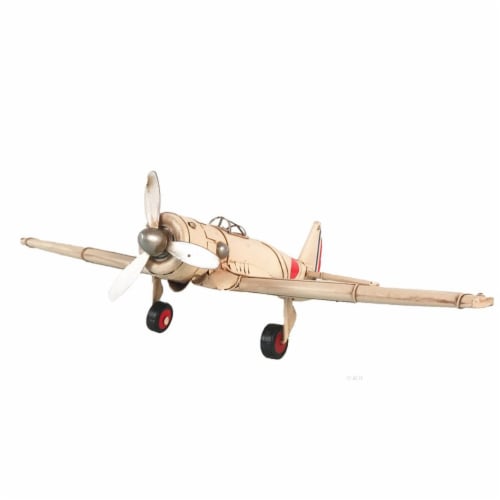 The Nakajima Ki 43 Oscar was an air superiority fighter designed for the army operations The aircraft saw action in many battles of the Pacific primarily in support of Japanese ground forces Unlike many aircraft of the war that has faded into obscurity the ki 43 has remained prominent today due to its countless appearance in movies games and various other art forms as a symbol of Japan s resilience as the United States pushed closer to Japan mainland Its service history allow for an engaging conversation piece or simply as a token of a time when battleships ruled the seas Features . Features a full tin construction clean paint rotating propellers and rolling landing gears. The red painted circles are vibrant bold and contrast well against the white body. The engine couling to very detail with exhaust vents and flaps. It makes for the perfect gift for anyone or as small item to decorate a house. Places it could fit include a table counter shelf or maybe a work desk Specifications . Dimension 18 L x 14 W x 6 H. Weight 2 lbs